Whether it's dancing raisins, happy cows, a "can a week" of almonds or eat more guacamole, California farmers have spent millions of dollars on advertising campaigns designed to get us to buy more Golden State products.

But do we really appreciate our California farmers?

We're about to find out, via a Canadian public relations and advertising firm - of all things.

The California Agriculture Communications Coalition, via the Western Growers Association, has awarded a contract (advertised as $357,500 over three years) to AdFarm to "communicate the value of the agriculture industry to the state of California and reconnect consumers to the source of their food supply."

The Coalition is the result of a realization that the state's 90 or so agricultural organizations were not together on message and that might be hurting the ag industry's ability to grow in CA. A more unified approach with consistency in communications would help, was the conclusion.

Some may argue that CA's ag industry's worst enemy right now is not a lack of consumer appreciation. I can't tell you how many times I was told in school about the greatness of CA's farm belt, and how it delivered almost all of the nation's fresh produce. No, right now the farmer's worst enemy is court-imposed restrictions on water deliveries. Did anyone see the mile after mile of dust-bowl farms in CA these past few months?

Now comes a Canadian advertising and public relations firm to help on image. It will be fun to watch. Check back for updates.
Posted by PR in Los Angeles at 1:31 PM 2 comments:

A Tiger of a statement coming? 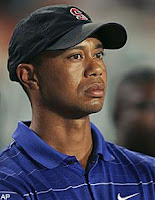 It's been three months and counting for Tiger.

Until this Friday, Feb. 19, when he is expected to hold a press conference to.......announce his return to golf.
And, what else? Tiger?

Public relations professionals have almost unanimously criticized Woods and his inner circle for mishandling the golfer's misfortunes from a communications and damage-control standpoint.
I contend his silence may have been the best strategy.
What do you think?
His last "statement" about this was Dec. 11 on his web site, saying he was taking a leave of golf and he was sorry, and he asked forgiveness. He said he wanted to devote his time to being a better father and husband....and person.
In the interim, he has lost a large number of major sponsors. His fellow golfers have turned on him. The PGA has lost money.
He has been the subject of rumor and speculation, much of which - in theory - he could have prevented, controlled or balanced had he spoken or made any visible appearance.
But, my god, look at his case and you'll see why silence may have been the best thing. One affair could have been forgivable. But, a seemingly endless stream of women? This was far too much to overcome for an international figure who had built an empire both on his capabilities and his good-guy image. Does anyone honestly believe a press conference - where we could see a "visibly emotional" Tiger - followed by appearances on Oprah and other carefully crafted publicity tactics would have prevented these losses?
His fall was simply too big for immediate communications.
There has been no true precedent for Tiger. Kobe was a singular event. Other "infidelities" among popular figures were just as limited. And, I contend, no other athlete had the same image or financial empire or impact on his/her sport. So, I argue, it is not as easy as everyone believes - that you can pull out the standard public relations manual and begin the damage control/recovery game.
In Tiger's case, taking a breather may have been the best strategy. Let the damage occur - and it would have occurred like this anyway. Let everyone take their shots. The "truth" in this case is ugly - so why let Tiger try to give his side or try to answer to each and ever little detail? If he talks, it only keeps the story near the top of the news cycle that more. I believe we would have had more press coverage if Tiger spoke right away. So, give it a proper amount of space between "incident" and "press conference."
Why?
People want to forgive Tiger. Sponsors want Tiger back. The PGA needs Tiger. Come back too soon - which marks the start of the forgiveness period, and Tiger makes sponsors and the PGA look too greedy, too eager. Come back too soon and fans won't be ready to forgive. Their anger, hurt and disrepect will still be raging. And, if he is truly trying to repair a marriage - let him. Kobe became a better husband and father, so it's possible. But Kobe didn't have an empire to reassemble.
Tiger's case is simply too big to rush it. I know my colleagues will think I'm nuts. This may be the one and only time I say silence is better.
What do you think Tiger should say Friday? Leave comments here.

Social media, trust and who's controlling it

First, congratulations to my friend Gail Becker for getting the LA Times to write about her company's latest trust barometer survey regarding social media and how people view who is credible in the this environment.

The Edelman Trust Barometer is a great tool for all public relations professionals.

In public relations, there has been a battle on two fronts when it comes to social media.

One front is who controls, drives social media at a company - is it marketing or the public relations department? Public relations pros have successfully argued that social media is one tool among many to communicate with your audiences and, thus, one needs a comprehensive strategy. Therefore, public relations should be in charge because this is what we've been doing for decades. Period. End of story.

The other battle is over specialization. Social media created an explosion of smaller firms specializing in social media. While the "big firms" did what they are good at - either creating speciality divisions or gobbling up small shops - companies recognized certain advantages of using smaller, more nimble firms specializing in social media. In fact, some of the most successful social media campaigns in the past two years were conducted by small, independent firms. Check the names on the awards listings.

It's hard to tell why companies chose another service provider over their agency of record. But it's been done before and it will be interesting to see how it all shakes out.

In the tech boom of the 1990s, dozens, perhaps hundreds of specialty firms were created to handle the $million of work offered by start-ups. And, like now, existing public relations agencies created speciality divisions to handle that brand of business. I know, because I was put in charge of building the technology practice at the Los Angeles office of the once mighty Stoorza, Ziegaus and Metzger public relations agency. After a while, the best and strongest rose up to take most of the tech business and emerge from the tech bust. However, some of the best and most profitable specialty firms were bought by the bigger agencies. Now,while many tech specialty agencies exist, the conglomerates can easily handle tech accounts.

Today may be different. Unlike the past, companies are more comfortable in having multiple PR agencies vs. a single AOR. So says Fred Muir, formerly of Burson and Marsteller, at a recent PRSA-LA event. If true, then more firms specializing in social media should be around for a while (if they can resist tempting offers by the biggees).

And that means the other battle has begun - who will "drive" the conversation about social media. Edelman's survey is already the subject of debate by the specialists. For example, see the "Endless Plain" blog entry here.

For the good of the profession, let's not leave doubt in the minds of potential clients. Research-driven strategies and tactics should rule the day.

Check back here soon for a listing of some of the better (my opinion, only) social media commentators/experts.
Posted by PR in Los Angeles at 8:25 AM 7 comments: