As reported by my friend Kevin at LAObserved, there is a new president of the LA Newspaper Group - which runs all LA-area papers owned by MediaNews Group (of the Dean Singleton fame).

Since Jack Klunder was raised from the circulation side of the newspaper business, don't expect any major changes in how the news side operates. Which, in this case, doesn't resemble the previous glory days when Jack Kent Cooke owned the LA Daily News and before newspapers began losing massive amounts of money as the free news on the internet caused circulation declines.

Many newspapers are still struggling financially, which in turn means the quality of journalism has suffered because there are fewer journalist and many of the good ones have left for other work (like public relations!)

It's easy to focus on the ownership blues of the LA Times, but no one should forget that MediaNews is no longer run by Singleton, but by a hedge fund. And a hedge fund is not about to spend dollars without any short-term return.

So, it will be interesting to see if Mr. Klunder is here merely to maintain cost-controls, or if he has any specific marching orders. Cost cutting at the Daily News has left it with a skeleton news crew, including forcing some veteran editors to go back into reporting duties. Similar downsizing has left other newspapers in the group with very small newsrooms.

And with AOL rumored to cut staff at money-losing Patch, it will be a few more turbulent years in the greater LA news media market.
Posted by PR in Los Angeles at 12:35 PM No comments: 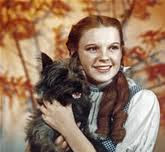 Perhaps I continue to live up to that silly notation in my high school yearbook. My best quality? Being an optimist.

But in PR, we constant advise clients that there are ways to turn a potentially negative issue into a positive one, to take the energy that might be generated over a controversy and use that to bring attention to a solution that you can control and win admiration for your stance.

Here is the latest example.

PETA is (sorry) losing its fur over over a proposed bill in Kansas that would make Toto the state dog. PETA, as reported here, believes such a move will create puppy mills to meet the eventual demand for cairn terriers. PETA doesn't have a problem naming a state dog, they would rather see it as a mutt, since, presumably, that is all you will find in shelters.

Here is your chance, PETA. Rather than take the usual negative stance that has hurt your image over the year, look for the opportunity to final leverage legislation and the money needed for enforcement to put puppy mills out of business. We all know the source of our coffee beans - to make sure we're getting them from a sustainable operation - why not a similar effort for the sale of pets?

Why not make Toto the face of a dog urging future pet owners to do the right thing?
Posted by PR in Los Angeles at 2:33 PM No comments: