Why is Paula Deen crying?

Why is the queen of southern food crying?  How is Paula Deen's reputation struggle different from prior ones?  What are her chances at recovery? 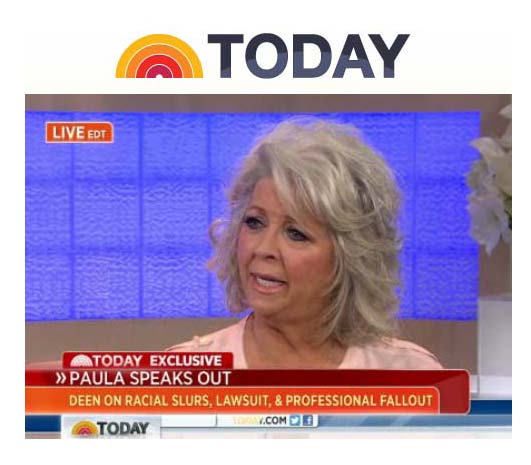 Image and reputation recovery is a tricky business.  Because of scandals and because humans are, well, humans, public relations professionals are routinely called upon to handle both the immediate crisis, and develop the strategy for a better future.

"Make the issue go away" is a refrain I commonly hear from crisis clients.  "What can you do to turn my image around?"  "How are we going to save my reputation?"

As PR pros know, there are no cookie cutter recipes (sorry, had to... when talking about Paula) to rebuilding or rehabilitating a reputation or image.  Each one is a learning experience.  However, success or failure depends on some fundamentals (explained below).

Tiger Woods. Lance Armstrong. Martha Stewart. Two out of these three recent falls-from-grace appear to have recovered, in part because they followed the fundamentals. These are all empires built upon a persona - an image carefully crafted and managed to bring in millions.  Something goes wrong in that person's life, and an empire can quickly crumble. Endorsements, licensing deals and corporate relationships disappear. Big money follows big personalities, as long as they behave.

What are Paula Deen's chances?

Let's look at some of the fundamentals to reputation recovery.

Hit the airwaves
Perhaps her first step was on the NBC Today show. albeit a few days late. (My go-to would have been Oprah - for some very obvious reasons).  But judging by most reactions, Paula didn't execute well. Matt Lauer can be a tough interview. He knows why damaged goods appears on TV.  So, he first asked the appropriate question: If Paula was sitting next to him to keep the financial empire afloat?  Not a real solid answer here. She deflected that one and instead was trying to have a "personal moment" with Matt and America.  It did not appear she had a good game plan going in - other than some hastily assembled messages.

Second - ARS (Apologize, show Remorse and be Sincere)
On Today, we saw a Paula Deen who was trying to show America her true nature, what she is made of and how her daddy raised her.  Potentially good strategies, but these must be delivered with precision. But she failed to do something right out of the gate.  America was waiting to hear an apology.  That is step number one. No options here. Save explanations for later.  "I'm sorry for being insensitive. I apologize for tolerating racial slurs in my presence.  I apologize for ..."  Once the apology is out there, then people will begin to listen and allow you to enter the road to forgiveness.  The public wants to forgive you.  But, you must meet them halfway.  Apologize and show remorse. Make it sincere. (Remorse and sincerity were not evident - in the eyes of a judgmental public - when Lance Armstrong came clean in front of Oprah).   Paula, dear, you can't expect America to "get to know you" in four minutes on the Today show. It will come with time. Use these precious minutes to get the apologize out, AND explain your crazy statement from the deposition about not understanding what offends people.  (So, you are an ignorant racist?)

Third - remain composed
But why was she crying this time around? Why did she look so distraught?  Paula's past responses to attacks on her reputation were executed with much better precision. Really - look at these older videos.  Some people remember the diabetes issue, but America has moved on from that one. On Today, she was in far too an emotional state to be on TV.  I would have cancelled a second time if she wasn't ready.  Yes, we want to see that a situation or an issue has deeply impacted you (and your family and friends), we want you to be sincere, but we also want you to be a strong individual who appears to have the conviction to turn things around and get better. Paula looks defeated - and if you look defeated, there is no hope for recovery.  Game over.

Be quick
(And, as John Wooden would say, "but don't hurry.")   America had been waiting for an official response from Paula.  And, apparently so were her corporate partners and TV network.  Her financial partners were "evaluating their positions" - so that means she needed to be much faster (quick) in huddling with these companies and letting them know her immediate (quick) plans to apologize publicly and to work with them to establish new initiatives associated with the situation.  Paula's brand is well suited to launch educational initiatives aimed at promoting tolerance, fairness and equality in the workplace and beyond. Get people in place to make this happen - quickly, so you can announce it.  But, sadly, she hurried a TV appearance.  Corporate partners were not impressed and could no longer wait.  Ties severed.

Seek counsel?
Paula reached out to Rev. Jackson who essentially vowed to save her and enlighten her. This is a small tactical step that can be viewed with skepticism. Tread lightly here.  It's much better to...

Plan the long game
Reputation recovery does not happen overnight. It occurs in small steps.  Be patient and all will be forgiven - if you do the right thing.

(Next: a discussion about the fickle, changing public and Anne Rice's plea for the mobs to go away)

Posted by PR in Los Angeles at 3:16 PM No comments: